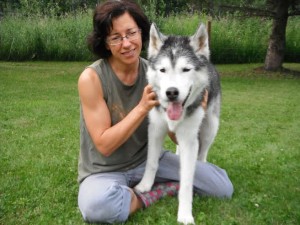 Jackie Wepruk joined the Board in 2015. She has a Bachelor of Arts degree in Psychology from the University of Winnipeg, and a Master of Environmental Design from the University of Calgary. Her thesis involved assessing models for an animal care program in wildlife research for Parks Canada. Before concentrating her efforts in the field of animal welfare she spent ten years providing personal care, community support and program development for persons with developmental disabilities.

Upon completing her master’s degree, Jackie was involved in a variety of farm animal welfare contracts with the Alberta Farm Animal Care Association (AFAC) and other farm organizations including:

She was involved in efforts that led to the creation of the National Farm Animal Care Council (NFACC) in 2005 and is the general manager of the organization. In this capacity she facilitates a partnership between farmed animal industries, governments, the veterinary community, the humane movement and other alliedgroups to advance farm animal welfare in Canada. A variety of experiences have informed her perspectives and passions relative to animal welfare including three years working at an animal shelter, involvement in breed rescue with Siberian Huskies and participating in the Code Development Committee that created the sled dog standard of care in British Columbia.

Home life includes a kennel of beloved Siberian Huskies that Jackie competes with in obedience trails and mid-distance sled dog races. Winters are spent training and racing in Canada and the U.S. She is particularly interested in how the lives and welfare of working animals is enhanced by having a “job”; often saying that her dogs are the most fulfilled beings on the planet.