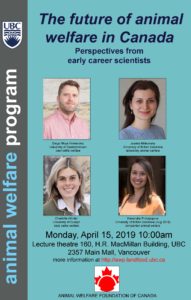 Temple Grandin, University of Colorado – “Maintaining High Standards in Animal Welfare”
The 2016 Stratton Lecture “Maintaining high standards in animal welfare” by Dr Temple Grandin was a tremendous success. The interest from the public and the University community was overwhelming. Dr Grandin’s talk was fully subscribed two weeks before the event, with a waiting list of 164. Dr Grandin kindly allowed us to audio tape her talk, a link to which was sent to all those on the wait list. The talk was broadcast on UBC CiTR radio, and the lecture is now available as a podcast to the general public at http://reachout.landfood.ubc.ca/2016/lfs-centennial-temple-grandin/?login 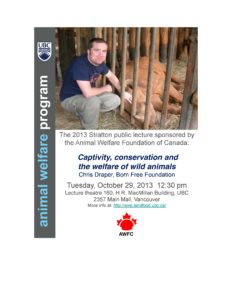 2012
Dr Becky Whay, Professor, University of Bristol, School of Veterinary Medicine. “Improving the lives of working horse (and their owners) in the developing world”